Blog Why can the flowering season be the auspicious moment for advertising campaigns?

Why can the flowering season be the auspicious moment for advertising campaigns?

At first, this type of targeting was developed for Polish campaigns. Hybrid began to cooperate with OBAS, one of the leading European scientific centers for the study of allergens in the air. It collects and provides daily data on the presence of allergens and their concentration in the environment for each region in Poland, and moreover the information is checked by a medical specialist who prevents errors. So Hybrid receives data on 14 allergens, digitizes them and builds a forecast for the near future.

Hybrid has developed a unique pollen technology that makes it possible to automate advertising campaigns based on the presence of plant pollen in the environment such as hazel, alder, birch, ash, oak, herbs, plantain, sorrel, nettle, gooseberry, wormwood, ragweed and some other. The solution allows you to customize the display of creatives in accordance with the changing allergens concentration on a scale from 0 to 9.

The first advertising campaign using a trigger was performed for Sandoz and the allergy drug Nasometin Control during the flowering season: from the second half of March until the end of May.

We were daily receiving data for all regional centers of Poland on 14 currently active allergens and the risk of allergies. As part of the campaign, there was a personalized rich-media creative that dynamically adjusted to the active allergen. The ad display took place when its concentration in the selected city was above 3 points. When there were several active allergens on the same day, their display on the banner was evenly distributed among themselves.

All allergen data that had been used for advertising campaigns was also checked by a researcher. After the campaign ended, he confirmed that pollination calendars based on historical data were unreliable. It is not worth taking them into account while planning advertising.

Using the new Pollen tool, we were able to display up-to-date data and relevant creatives for 14 cities in Poland. We not only implemented new mechanics, but also made adjustments to the planning of antihistamine medicine advertising campaigns.

Pollen targeting for other countries

After successfully launching the technology in Poland, Hybrid has scaled it up worldwide. The work technology is similar to Air quality targeting, i.e. the data is automatically sent to the platform via API from The Weather Channel providers. In the campaign settings, it is possible to select the required level on the scale: from the complete allergens absence in the air to a very high level.

The Weather Channel's pollen forecast has a disaggregation by types, such as ragweed, while Pollen Levels Today tracks ALL pollen types. The 15-day forecast shows not only  pollen levels, that’s why even if it's low, the overall risk of allergies can be high.

Here the forecast for 3 days for the most serious stimuli is: 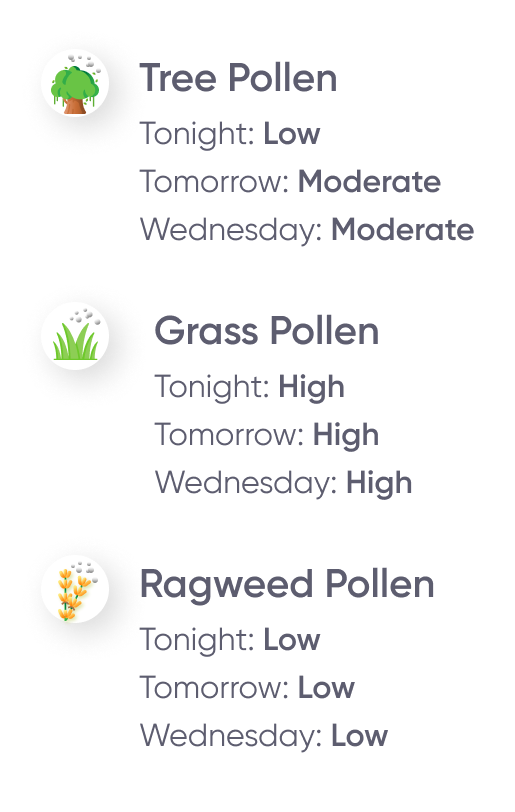 If you need to run an advertising campaign in the regions where the flowering season has begun and there is an increased concentration of various types of allergens in the air, then select the appropriate settings in the Hybrid Platform. Ads will automatically start or stop, depending on the conditions.

For whom that suits?

Pollen targeting is relevant not only for a wide group of pharmaceutical pharmaceuticals such as antihistamines, antiallergics, nasal and sinus hygiene products, dietary supplements, sorbents or the medical industry, but also for other segments that target people with allergies:

The main advantage of using targeting based on environmental data is its native and an informative message for the user. In the beginning, we inform them about the current state of the environment in their location, and then let them know about the product or service. Communication built according to this scenario is perceived by users as a more native one.

Such triggers male it possible to competently communicate with the target audience, optimize the advertising budget and show relevant offers.

To learn more about Pollen's opportunities for your advertising campaign, leave a request.